After about 40 years, at the age of 59, I got back to harmonica playing and I am very thankful for that to my little grand daughter.

This is my story:
As a child and teenager I played harmonica in the sixties and seventies.
On some way or another I lost my interest in this instrument in my teens.
Well, once you get to secondary and high school your life changes quite a bit.
After high school I got drafted for the military. Later on I started my first job, and so on.
The harmonica has never really surfaced again in my mind. I the meantime, I’d have already experimented with a keyboard in the eighties; then an acoustic (Ibanez) and an electric guitar (Fender Stratocaster) in the nineties. Anyway, all instruments disappeared from my life, little by little.

In 2014, my wife bought a harmonica in a second hand shop, it was a Hohner Echo in fair condition. My wife did not know I could play harmonica, but she bought the instrument because it was a beautiful shiny thing.
The instrument ended up in a drawer in the living room cabinet.

In early 2015 our granddaughter Vienna (18 months old at that moment) stayed with us for the weekend and on a Saturday evening Vienna found the instrument and came running to me in the kitchen. Vienna pushed the harmonica in my hand and looked at me as if she wanted to say “Now play it, old man.” I played the instrument and, to my surprise, I could still remember the tunes I used to play, way back in the sixties and seventies and played them well. Ria (my wife), Vienna and I had a great evening.
Vienna took me back to the harmonica, at the age of 59, after about 43. Now I play and collect harmonicas, preferably of the Hohner brand. I mainly play (diatonic) traditional songs, but learning to play the blues as well.
I really love those shiny instruments and have mostly HOHNER harmonicas in my collection. 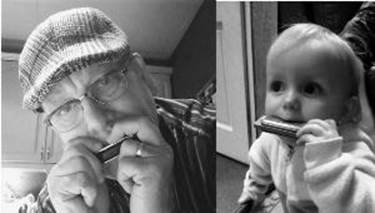 Hi Shamrock,
when I first encountered the harmonica, it was the look which got me hooked too. Later I learned to play it and love it for musical reasons, but the moment of connection was definitely visual

Wishing you and your family lots of fun with your harmonicas!